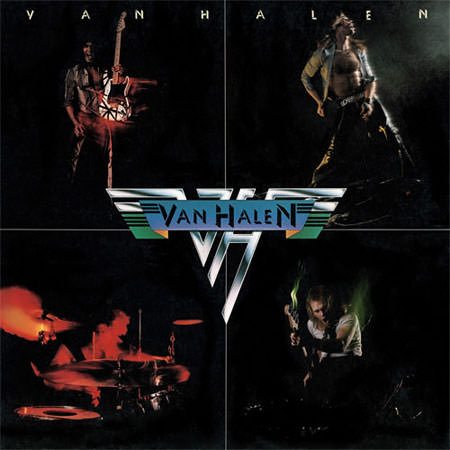 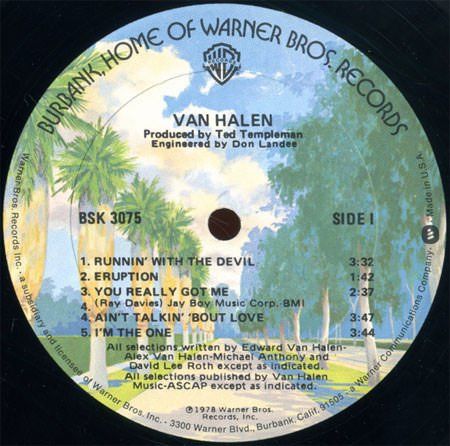 The first album by Van Halen: February 10, 1978. I do not remember the exact day, for I wasn’t caring about taking notes at the age of seven but I do remember the moment I heard my first note of Van Halen. Early 1978, my family and I went to Ala Moana Shopping Center in Honolulu. While my dad probably went to the book store to look at car, motorcycle, or bodybuilding magazines, and my mom went to look for fabric or whatever she looked for at Ala Moana, my sanctuary was the record store. There were a few “record sections” at Ala Moana in the late 70’s but my haven was DJ’s Sound City, because:

I was looking around, as I always did, and looking towards the entrance from the back (which most likely meant I was going through jazz and eying animated titties on Miles Davis album covers), I heard what sounded like traffic, as if I was on a freeway. All of a sudden I heard a pounding bass note, and then that guitar.

The music sounded nothing like the hard rock I listened to as a kid, this sounded like it was on the “next level”. I don’t know if it was the guitar, the bass, the drunms, or the wild singer. I just remember standing there going “what is this?” or whatever I said at seven years old. I don’t remember hearing “Eruption” or “You Really Got Me” just yet, for my dad came to get me, but what I did look for was the cover of what was playing. I saw a smiling man holding a guitar with electrical tape wrapped on it. On the turntable was the Warner Bros. “Burbank trees” label. That moment has been embedded in my mind forever.

My Uncle David would buy the album for himself, as he was the guitarist who found himself in countless bands so whoever were the hot guitarists, he had their album. I don’t remember sharing a moment with my uncle where he played the album while I was at his apartment, but the album was played religiously on the radio from the start. Then again, radio in the late 70’s seemed a bit more free, or at least the type of radio stations I listened to. It may not have been a format to my mind, but 35 years later, Van Halen is still played religiously, not bad for an album that wasn’t a bit success on the charts. On the radio, though: I couldn’t turn on the radio without hearing “Eruption” always attached with “You Really Got Me”, “Jamie Crying”, “Feel Your Love Tonight”, “Ice Cream Man”, “Ain’t Talkin’ ‘Bout Love”, “Atomic Punk”, and the others. As I would eventually get into reading hard rock/heavy metal magazines, I realized that Eddie Van Halen became the era’s new master, and who didn’t want to worship the man?

As I was still someone who tagged along with my parents wherever they went, I would still see new Van Halen albums in the tracks. I clearly remember seeing Women And Children First at the GEM department store on Ward Avenue in Honolulu, and may have seen Fair Warning and Diver Down there too but it was these first five VH albums where I got to know about their music, at least from a distance. I never bought these albums until after the fact, but as an early viewer of MTV, the first VH videos I saw were “So This Is Love” and “Unchained”. I remember watching the video for “Intruder/(Oh) Pretty Woman” and wondering who the woman was (only to discover later that year that the woman was a man), and also hearing whatever hit single Warner Bros. released. “Dancing In The Streets”? All over the radio. Yet the first VH album I bought was 1984. These days, having that album be my first VH album might seem odd since most will say that the first five albums had “the better songs”, and arguably that’s true, but there were a lot of good songs on 1984. Same with OU812 (for I skipped 5150, even though I really liked “Why Can’t This Be Love”), but… no matter.

As a high school radio DJ, Van Halen were the kings. It did matter that David Lee Roth went solo and Sammy Hagar became the new singer, but it was also the first time I really got to soak myself into the music, and regardless of the power of “Dance The Night Away”, “Romeo Delight”, “Beautiful Girls”, “Hear About It Later”, and of course “Hot For Teacher”, “I’ll Wait”, “Panama”, and “Jump”, all roads lead to the band’s glorious 1978 debut. I always loved how on the cover, Alex Van Halen looked demonic while Anthony just held the bass like a military man. Roth, as always, looking lovely and gorgeous as he always is. Inner sleeve: everyone looking exhausted, with AVH smiling devilishly. Roth: still lovely and gorgeous. If England would have the NWOBHM, then Van Halen was America’s equivalent of that, and it also marked the revolution of what was to come from hard rock and heavy metal in the 1980’s.

On the audio side of things, I always liked the gold 24k CD that DCC made, where the album was remastered by Steve Hoffman. However, finding U.S. pressings of the album with the Warner Bros. “Burbank trees” label are fairly easy to find and shouldn’t cost you any more than $5, and recent Warner Bros. remasters will do you just as good.